And… it’s over. An adventure over a year in the making. 200 miles, 30 unforgettable hours, 12 amazing people. It couldn’t have happened without all of you, literally. I couldn’t have asked for a better team.

Runner 1: Co-Captain Melissa. You were my earliest supporter. Your advice was invaluable to the very end. Thanks for getting and organizing Van 1, actively managing logistics and communications before and during the race, being decisive when I wasn’t, on top of driving and running. You’re unbelievable. Thank you so much, again.

Runners 2, 3 and 6: Cliff, Naomi, and Brendan. You guys stuck with me through last year’s cancellation. For over half a year, you guys were this team’s core members. Thanks for sticking it through with me! (Also, Brendan — I heard your van appreciated your dad jokes. :D)

Runners 4 and 5: David and Zarni. You guys were the seasoned vets. I never once felt worried about you guys. I’m glad that you guys joined us on this adventure. I’m already looking forward to the next one with you both. 🙂

Runner 7: Scott. Heh, thanks for taking the brunt of our miles, the tireless energy, and adding all that spice to our conversations. 😛 This race wouldn’t have been the same without you!

Runners 9: Amy. You rocked. This was the most miles you’ve ever run in a single weekend. Yet, you actually made up time for us when we were behind. Keep rocking!

Runner 10: Claire. You took the second-most miles on our team, and the second-most difficult stretch during high, uncovered heat. You never complained; you were always ready. You pushed and beat your limits. Thanks Claire.

Runner 11: Kelly. You were my assistant captain, whether you realized it or not. You got Van 2, you organized Van 2 supplies, you got our buffs, you staged our team before the race, you drove. I meant it when I said “it’s almost like I don’t have to do anything!” 🙂

Runner 12: Sean. You were our anchor. You’re a busy man, and I’m glad you made the effort to join us. Thanks for driving, toughing out some of our toughest hills and trails, and bringing us home.

My piece of our collective medal reads “adventure happens with everything else goes wrong.” I can’t think of a better captain’s medal. For the longest time, this show almost seemed like it wasn’t going to happen. Everything was “going wrong.” But in the end, I couldn’t have asked for a more “boring” adventure — with almost everything went so right that we were already talking about a “4th leg”… and maybe another team, another time. I’m looking forward to it. Thank you, Team #210, Team Jog-Claude van Damme.

Walk/jog. Lots of hobbling. Continuing left calf pain. A lot of intentional heel-striking and supination to even get up to a jog. This wasn’t a pleasant stroll.

Eventually, the pain lessened. But it wasn’t clear whether it was the “runner’s high” painkiller effect kicking in, or if my leg was getting better…

In the end, my calf was sore, so sore it really felt like I wasn’t going to be able to run any more legs. But I finished.

The night run. It’s been almost a year since I’ve run at night, since my 2017 Marcothon (not sure if I’m going to do it again this year). This run felt better and I didn’t have to walk.

I did get lost. Much of this route was really distance-padding by Ragnar. So about half of this route was residential. While I was in the latter residential section, I started following a string of runners who were on the left side of the road. I was pretty sure I had to stay on the right side. But ultimately, I crossed the street and headed south… until I finally checked the Ragnar app. I had gone an extra half mile. So in total, I ran an extra 0.9 miles here.

It was hot. But the tree cover helped.

The overall downhill profile of this leg also helped: I needed less from my calves. As I realized I was hitting a 7-min pace, I figured that it’d be prudent *not* to risk re-injury going any faster.

In the end, I made it to the next exchange before my own van did, which I started to increasingly expect after not seeing them pass me at all during my run. 😆

Now, the pain’s mostly subsided into discomfort and soreness. Maybe I still might have North Face and CIM this year?! It’s amusing how much happier I can be, recovering from disability. 😖 Still need to be cautious though. I reallh hope I won’t be waking up to pain tomorrow. 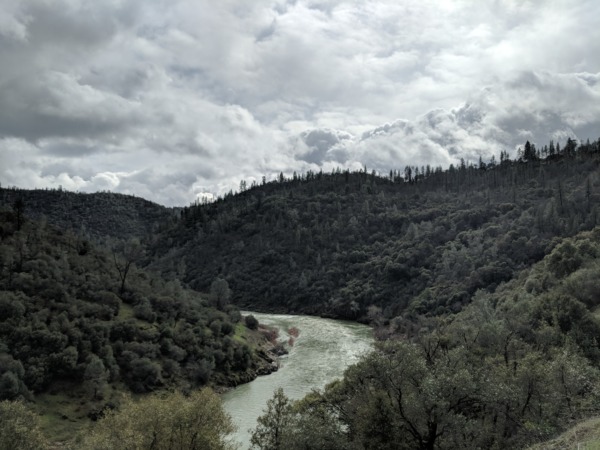